Gareth Thomas, President & CEO of Westhaven Gold, states: “Drilling at the FMN Zone has encountered more significant veining. It appears this zone strengthens as drilling continues along strike testing the present 600m gap between the FMN and Franz zones. The current drilling at the FMN Zone is expanding on the narrow but high-grade gold and silver intercepts first drilled in late 2020. In addition, the first two holes completed in the South Zone (SN21-152 and SN21-154) on the southwestern edge of the previous drilling has intersected Vein Zone 1 down dip by an additional 140m from previous drilling (Please see section below). This demonstrates that there is significant potential to increase the size of the South Zone vein system through exploration drilling. This bodes well for the Company as we move towards completing a maiden resource estimate for the South Zone in 2021.”

Peter Fischl, Exploration Manager of Westhaven, adds: “Drilling at Shovelnose in the latter part of 2020 has been primarily focused on testing vein continuity along the 4km strike length of Vein Zone 1, the most significant mineralized structure defined to date on the Shovelnose Gold Project. This program has extended the known vein system northwest into the gap between the FMN and Franz targets and has confirmed the vein system remains open to the northwest at Franz.  Vein Zone 1 will continue to be the focus for the coming year, including step out and infill drilling at South Zone. Other targets tested last year, such as the Romeo target, where drilling encountered significant gold pathfinders, remain to be tested further. Prospecting and mapping in 2020 has also drawn attention to several targets within 2km southwest of Vein Zone 1, proximal to the Brookmere showing.”

Holes SN20-130, 139, 145, 147 and 148 define an area of quartz veining in Zone 1 that is mineralized with gold and silver over a 200-metre strike length that appears to be rising to the northwest, as seen in hole 147. The drilling from late 2020 now indicates that Zone 1 at FMN has the potential to host gold bearing quartz veining at shallower depths. Such mineralization will be targeted in this year’s drilling.

Drilling in 2020 has traced the Franz Zone continuously to the northwest over a strike-length of 650m despite the presence of cross-faults. Vein Zone 1 at Franz remains open to the northwest where a northeast trending normal fault has down dropped and preserved the upper most portion of the vein zone. Hole SN20-124 here intersected a 4.7m wide carbonate rich vein assaying up to 1.51 g/t Au (over 0.62m).  This is interpreted to represent the upper most reaches of an epithermal vein system that will be tested down-dip and further along strike to the northwest in the coming weeks.

Drilling to date at the South Zone has defined three gold-bearing zones of quartz veining, Vein Zones 1 to 3. A diamond drill is currently focused in the South Zone as the Company moves towards completing a maiden resource for this zone in 2021.

SN21-152 intersected Vein Zone 1 from 283m to 307m down-hole that is comprised of sections of banded quartz, adularia, and ginguro including a 3.6-metre quartz breccia vein containing adularia and ginguro. A veinlet section continues from 307m to 348m. Drillhole SN21-154 was drilled at a -60 from the same pad and intercepted Vein Zone 1 from 280m downhole to 387m inclusive of banded quartz-adularia-ginguro bearing veins up to 1.4m wide along core axis. A veinlet zone continues from 387m to 425m downhole including banded pale grey quartz veins and adularia.

Two holes were drilled at Romeo this past year (SN20-133, SN20-140).  Both holes encountered significant gold pathfinders (arsenic, antimony, mercury), hosted in mudflow breccias, andesites and epiclastic sediments. Such pathfinders were previously detected at surface in rock and soil samples collected at Romeo.  They indicate the potential for a gold-bearing structure to occur in the Romeo target area.

On behalf of the Board of Directors
WESTHAVEN GOLD CORP.

Core samples were prepared using the PREP-31 package in ALS’s Kamloops facility each core sample is crushed to better than 70 % passing a 2 mm (Tyler 9 mesh, US Std. No.10) screen. A split of 250 g is taken and pulverized to better than 85 % passing a 75-micron (Tyler 200 mesh, US Std. No. 200) screen. 0.75g of this pulverized split is digested by Four Acid and analyzed via ICP-MS (method code ME-MS61m (+Hg)), which reports a 49-element suite of elements. All samples are analyzed by Fire Assay with an AES finish, method code Au-ICP21 (30g sample size). Additional Au screening is performed using ALS’s Au-SCR24 method, select samples are dry screened to 100 microns. A duplicate 50g fire assay is conducted on the undersized fraction as well as an assay on the entire oversize fraction. Total Au content, individual assays and weight fractions are reported. All analytical and assay procedures are conducted in ALS’s North Vancouver facility. A QA/QC program included laboratory and field standards inserted every 25 samples. At least one field blank is inserted in every batch of 25 samples, with additional blanks inserted following samples with visible gold.

Westhaven is a gold-focused exploration company advancing the high-grade discovery on the Shovelnose project in Canada’s newest gold district, the Spences Bridge Gold Belt.  Westhaven controls 37,000 hectares (370 square kilometres) with four 100% owned gold properties spread along this underexplored belt. The Shovelnose property is situated off a major highway, near power, rail, large producing mines, and within commuting distance from the city of Merritt, which translates into low-cost exploration.

Westhaven trades on the TSX Venture Exchange under the ticker symbol WHN. For further information, please call 604-336-6921 or visit Westhaven’s website at www.westhavengold.com 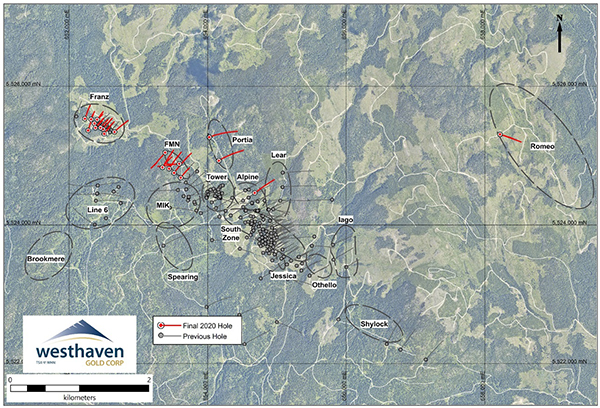 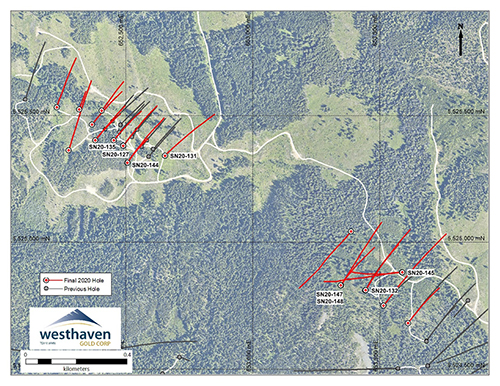 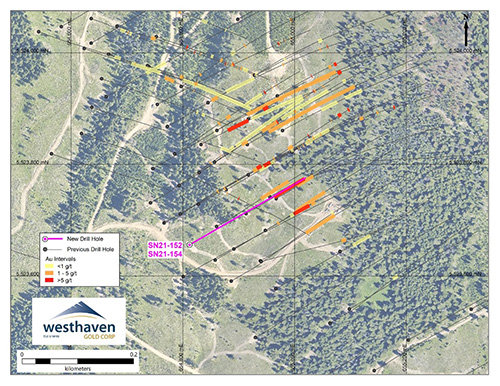 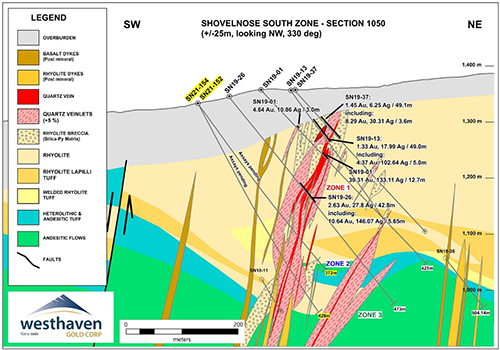